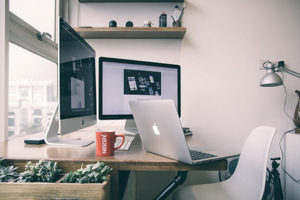 We are in the early years of website development. Not surprisingly, many of the folks working as website designers today started their career as graphic designers. There’s nothing wrong with this transition, but if it’s your job to hire a designer, it’s helpful and important to understand the differences.

What are the difference?

Designers are a visual communicators. Their job is to communicate ideas through the use of layout, images, and type. They must consider several things at once: the existing brand and needs of the client, the desires of their customers, and the goals of the project. These are things the web designer and the graphic designer have in common.

Unique to the website designer is the additional knowledge needed to understand what makes a site functional, intuitive and easy to use. One doesn’t know what device a user will have, so the same website has to look great on a smart phone and a large screen tv. Fluid (flexible) design, the functionality that adjusts the layout to any screen size, makes this possible. This concept is not one that a traditional graphic designer will have experienced in the print world. Graphic designers expect designs to be fixed. Web designers know how to create designs that are fluid.

Another difference between web design and graphic design is the use of color. Experienced print designers expect a project’s colors to be consistent from the beginning of the print run to the end. However, web designers know that different monitors will display the same color differently and may render images at different resolutions.

Finally, the website designer understands that some visitors to their website will be on fast internet connections, while others will have very slow connections.

Why does it matter?

With study and experience, good graphic designers can do good work on the web. Understandably, though, it isn’t always a smooth transition. It can be frustrating for the designer and the client who don’t understand what can and can’t be done. It’s one thing to deliver an awesome design. Turning that design into a good user experience is another thing entirely.

As we already mentioned, graphic designers design for a single fixed page size. Web designers are essentially creating multiple layouts simultaneously. Web designers constantly ask themselves, “How will this look on a monitor that’s set for a resolution other than what I’m using, and how is this going to work on a tablet or on a phone (either landscape or portrait).”

The use of color

Using color on the web is different from color in a print project. Different file formats are used and designers must understand which formats are best for photographs and which are appropriate for text. Additionally, since color displays unreliably, the web designer has to think about their use of color in a different way. Will the background color be overwhelming if it displays darker? Will the font color be unreadable if it displays lighter?

Another distinction is that the graphic designer typically works on their own on the project from beginning to end. The print designer makes all the decisions about how the document will look. When done, the designer delivers the files to the printer.

Adding in the developer

On the other hand, web designers typically work with a web developer. The designer creates the elements, determines the color palette and typography, and it’s the developer who prepares it for publishing on the web. (Most web designers aren’t learning or working with code, so they need someone else to build their design.) Rather than have the designer throw the developer a completed design, it is best when the designer and the developer work together from the beginning. This collaboration usually results in less rework and a more cohesive final product.

Finally, graphic designers don’t necessarily have to worry about the file size of an image. Yes, they need to make sure it’s large enough to reproduce well, but they don’t really care if the file itself is huge. On the other hand, a web designer must consider the page load time for each individual image. Oversized graphics increase page load time, which is frustrating for users on slow connections, and Google penalizes slow websites with lower ranking in search engine results.

At Trevellyan.biz, our designer started out as a print designer, and slowly made her way to the web. That’s why we understand the issue of web designer vs graphic designer. Our designer works side-by-side with our developer to create projects with good aesthetics and clean code. We are able to complete a project efficiently because we understand and value each other’s knowledge and skills. Learn more about our website design and development services. And if you’d like to discuss working with us, please fill our website project form or give us a call at 518.392.0846.